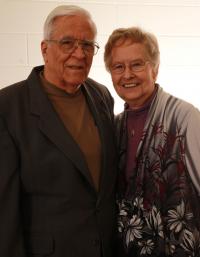 Harold Dimmitt became a pastor of a church in Hawaii for five years before retiring from the U.S. Navy. He served that church for another five years after which he and his wife Ann planted a new church where he served as pastor for another 12 years.

During those years he attended and graduated from International Bible College graduating with a Master’s Degree in Biblical Studies and served as a ministry volunteer in the jail and prisons in Hawaii for 16 years. Because of his involvement in the ministry behind bars, he felt led to be involved full time, resigned from his pastorate to become a chaplain with Good News Jail & Prison ministry serving in the jail and prisons of Hawaii for three years before transferring to serve Henrico County Jails for 13 years and then the Virginia Peninsula Regional Jail in Williamsburg for four years. Upon retiring from Good News, he joined the staff at Goodwill where he and Ann have been members for more than 15 years to serve a pastoral role with the senior members of the church.