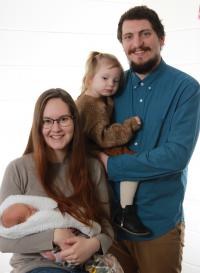 Gabriel was born and raised in Romania, where he received his Bachelor’s Degree in Theology, but moved to the U.S. in 2015 to study at Southeastern Baptist Theological Seminary. During his studies, he felt called to serve God through pastoral ministry and became the Family Ministry Pastor at Goodwill in 2018, completing his M.Div. the same year. Currently, he and his wife, Emma – along with their two daughters, Roua and Silvia – seek to glorify the Lord as a family as they serve the youth, children, and young families of GBC and the Henrico community.